Which Test Cases to Automate

October 23, 2017
I've decided to blog a bit about my day-job, well, my career and passion really. Software testing, but the kind that makes sense, automated regression. But first and foremost a warning, when a computer validates some software, that's not called testing at all, it's called checking. See here for a bit more on why.

With that out of the way, lets move on. Automating anything is expensive, automating a test case is not a silver bullet, because a computer cannot validate things like a UI layout making sense, or even an API function call rejecting a parameter value either for that matter. Sure we get frameworks that test for UI changes in web pages and in WPF and other forms based applications. But when controls move and we all know that a UI changes cosmetically very often, that incurs maintenance cost. Tools exist to reduce that cost , but they only do so in very specific ways. 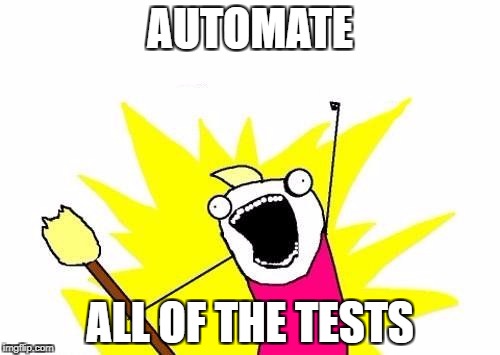 Likewise for Automation or Test tooling against public APIs. "Apps" on the internet are the main case here, but this also applies to locally consumed API's not just the web, and all the new kinds of web services available today, its a crazy farm almost. Just about everyone has a web service these days, or at least an API; and since that surface is the really high value customer interface, it's the best place to do testing and best place to automate at the same time. A test script using an API cannot just validate assertions in your test spec, without some skill in writing that script to be maintainable or scale well. Without going into design stasis, arguments about specs, or test frameworks, let's be really Agile; do the parts of the job we can get most early value from first and foremost.

But which test cases do you convert? From that huge batch of analysis done when you looked at this from a manual test perspective last year. The boss wants you to automate all of the things. Now.
Based on my inputs and the way we started doing this, one of the grads came up with using Excel. I'll link the sheet below, but first I'll explain what all of the columns mean.
Some things to notice here, I use a very low resolution scale of 1-5. Higher granularity in the question scales actually end up take much longer on average for a user to guess at a value, and let's face it, this is a game of educated guesses or estimates anyway. It's best if 2 people do this process together. Some of the columns only benefit from entering a 1 or a 5 and nothing in between, some of the columns even allow a 0. As a tester, I'd not expect you not to try entering a 0 in cases where it makes sense to, for these, the sheet will give still you a good answer out. So you can just add these all up, or give each question priorities. In another posting, I'll share the spreadsheet template and the weightings as well.

This only works well after you have obviously captured half a dozen cases and looked at them in relation. Remember, don't spend too much time on each row, this is a planning activity only. 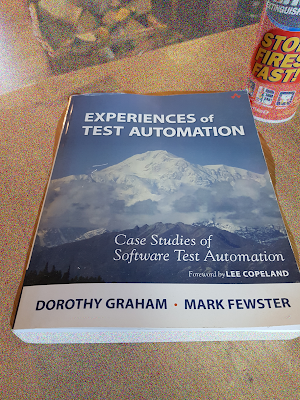 The reason I'm writing this up is mainly to remind myself of how blind I can get. So don't expect to feel sympathy. This all starts with a project to test Windows graphics drivers on a beta project. In order to deal with a CI issue which was failing to catch issues with the driver "silently" not installing in the test environment, I hatched a plan. My idea was that it would be quick and easy to build a machine that boots off a clean OS image to solve the problem where a driver fails to really uninstall after the last test run. So we get to test that a clean first-time install works. The trouble is, that it needed to be a real machine, so no VM's allowed, since this was a real graphics driver under test. In retrospect, I should have used something like Norton Ghost disc imaging, and busted my plan quicker, but I didn't. I got down a rabbit hole and opted on some dedicated hardware, needed a SSH connection to control it, got that working, needed Python test too 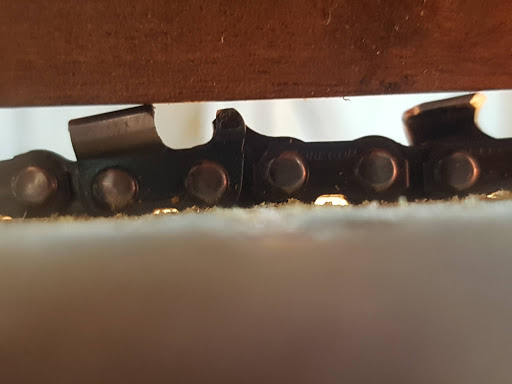 chain depth gauges So today it's sharpening the chainsaw or "saw chain" sharpening notes day. I loaned a machine similar to this one in the video right at the bottom and used that as a tutorial. All photos here are mine own. This is a titan 20"  https://www.screwfix.com/p/titan-ttl760chn-50cm-49cc-petrol-chainsaw/687fh  petrol unit. I have an electric saw, but that is a self-sharpener, so not relevant here today. If you are in a hurry, just scroll down to the video at the bottom. I also looked at the hand sharpening, and as in many of the videos I found a discrepancy, most people sharpen at 30° , even though when I checked, my manufacturer states 25° angle. If going by hand is your thing  https://www.youtube.com/watch?v=SzjmpNTVH6U  shows how to use a neat little hand sharpener. Once again people don't use the same angle, so  check and decide once. However I had this tool available to me to loan, so off I went. It takes a while to get the grinding disk end-stop